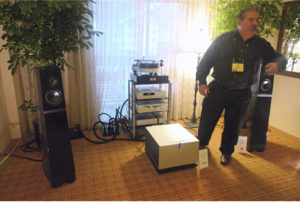 I am bad with names, and between shows I always forget Paul Manos’ name but I never forget his good­sounding, nicely lit, and professionally put together rooms. Like my conversations with Paul, the music in HFS rooms always flows easy and enjoyably. Probably because he always has the best­quality LP front ends. (Did I mention there were more rooms at RMAF with turntables and LPs than servers or CD players?) This time, Mr. Manos had two musically satisfying rooms.

The first room showcased the elegant and lively sounding Verity Audio Parsifal “Anniversary” loudspeakers ($24,995/pair). Verity loudspeakers are made in Québec, Canada and I have always regarded Verity as one of the most under­rated brands on the high­ end scene. Paul had them singing quite nicely at RMAF. But as you know, when a room sounds good (or bad) you can’t just blame the speakers. To make the Parsifals sing so nice, Paul was debuting the new and I think totally sexy ­looking (of course it is made in Italy) Audia Flight Strumento No. 4 Mk.II ($28,500) stereo amplifier. This amp­/speaker combo made music sparkle and gently pulse like the Mediterranean shoreline. While Paul was talking I swore I saw a bikini­ clad Brigitte Bardot walking behind him.

And speaking of sexy, Paul always features TW Acoustic turntables and Ortofon cartridges. The room with the Verity speakers featured a TW Acoustic GT SE turntable ($12,500) wearing a pair of TW 10.5 tonearms ($5500). One sported an Ortofon A95 cartridge and the other one featured the Ortofon Cadenza Mono . . . this is the kind of LP playback that makes its owners laugh when the subject of digital vs analog comes up. There was also a Audia Flight phono stage ($6195) and an Audia Flight Strumento No. 1 preamp ($17,500). 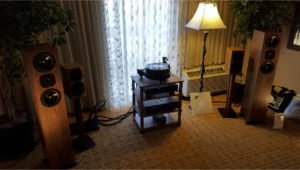 The Neat Acoustics Momentum SX7i speakers captivated me with a new vinyl pressing from Intervention Records of Joe Jackson’s Night and Day album. The system’s realistic portrayal of tone and timbre supercedes the average, keeping me pinned to my chair.

Anchored by the TW Acustic Raven GT SE ‘table, Ortofon TA­110 arm and Cadenza Black cartridge and powered by the Audia Flight FL Three S w/DAC and built in phono pre, the Neat Acoustics room was a joy to spend time in. 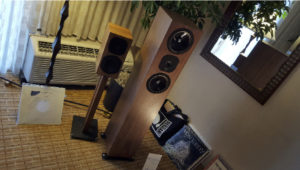 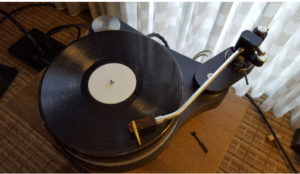